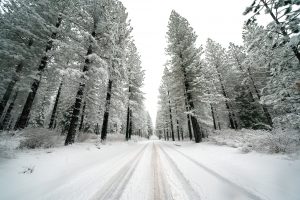 @kathryn_dyer and I were sitting at home one afternoon when the rain started pouring down hard. It was cold outside and probably snowing at Foresthill, a short drive away. We haven’t had any snow to speak of so we grabbed our gear in our Lowepro Bags and headed out in our Subaru Outback.

As we drove up I-80 it started to hail causing dangerous driving conditions. We turned onto Forest hill road and just passed the Forest Hill bridge when I saw an older Ford Crown Victoria spun out and crashed through the guard rail off to my left. I then locked eyes with the driver who had just got out of the driver’s side door. He had that confused look of what the hell just happened.
I immediately made a u-turn and went beck to help out. Kathy and I contacted the driver. He looked shaken up but said he was ok. He did not have a cell phone so Kathy let him call his wife on her iPhone and I called 911. It was still hailing hard and we all got soaked. 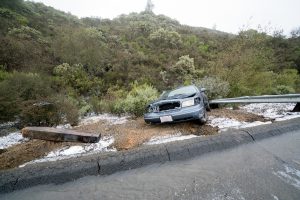 Once everybody was contacted, the driver told us he just became a father two months ago. He was coming around the turn and lost traction on the hail iced road. He slid off the road and hit the guard rail at approximately 50 mph. He said all he could think of was his new daughter and was thrilled that he was ok, as it could have been much worse. What you don’t see in the picture is that there was a steep 40’ gully where he went off the road. His car tore out five guard rail posts and totaled his car. He was, in fact, very lucky because he could have slid down the gully where no one would have never saw him. I’m sure he would have had serious injuries.

A short time later, a friend of his arrived and we took off. As we got further up the hill the snow started ragging. I pulled in to check out the Todd Valley Pond. We were the only ones there. It was snowing hard and I wanted to protect my camera from the elements. I put my all weather cover on my Sony A7RIII just to be safe. I didn’t want to take any chances with my new baby. I put on my Sony 12-24mm f4 G lens for the shot below and was able to get Kathy to pose with the umbrella. 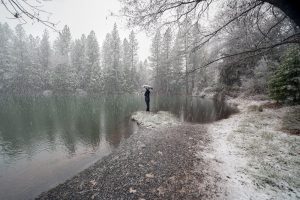 We were nearing the end of the day as sunset was at 5:18 pm so we headed towards Sugar Pine Reservoir. The snow was beautiful covering all the trees and the roadway, see above. This is a good area to see deer and we hoped to see some in the snow.

Kathy is our spotter as she has a great eye for finding deer. As we got closer to Sugar Pine Reservoir she spotted two bucks off to the right. I hit the brakes and slid for a while before stopping. I was super glad to be in our Subaru. It kicks ass in snow and I wouldn’t explore without it. 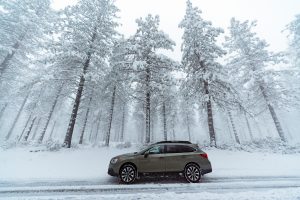 When we stopped we realized we didn’t have our cameras ready. We had to get our Sony A7R3’s out of the back seat. Kathy put on the Sony 24-70mm f/2.8 and I put on the Sony 70-200 mm f/4. Now we’re ready.
I backed up the hill slowly looking for our two prize bucks. What a shot that would make. A nice buck with that beautiful white backdrop. We looked high and low but no luck. A missed opportunity. We always say to have our cameras ready for that quick shot but we rarely do it. I must say we had them ready from then on.

As we got closer to Sugar Pine Reservoir I saw what a appeared to be two coyotes in the road ahead of us. I stopped, got my camera and took a shot through the windshield. As we got closer we saw they were two German Shepherds in the middle of nowhere. I got a good shot of one as we passed and then they were gone. Not the deer we hoped for but a cool shot anyway. 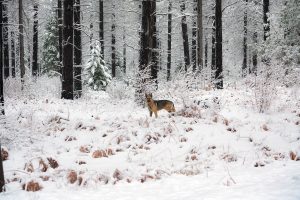 One of two German Shepherds

We finally made it to Sugar Pine Reservoir. No one was there and we had it to ourselves. Took some pics and headed out right after sunset as there was no color or shot.  Made it back home safely thanks to our trusted Subaru Outback. 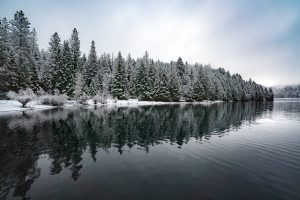